The votes for the first Online Challenge are in… And Dani Pedrosa wins out!

After narrowing down a list to 12 legendary names and machines, Dani Pedrosa emerged ahead of Mick Doohan and Max Biaggi to be the rider selected for the first Online Challenge of the 2021 MotoGP™ eSport Championship! 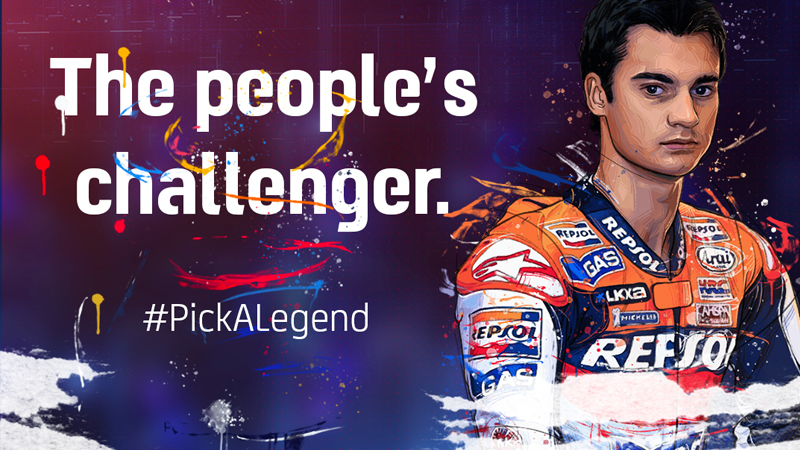 The start of the 2021 MotoGP™ eSport Championship is edging closer with the Pro Draft kicking off in March. But before then fans and competitors had their say on which famous rider and bike from the past will be selected for the year’s first Online Challenge.

In a twist for this year, you had the chance to vote for the rider you’d like to use in this Challenge. A total of 12 legendary riders from the past 30 years of MotoGP™ history were up for selection. But after four votes, we had a winner!

And the winner of the final vote on 10th February was triple world champion and 31-time MotoGP™ race winner Dani Pedrosa!

As well as gamers using vintage names and machinery in this challenge, they will also be pushing to post the fastest possible time at a vintage MotoGP™ track: Laguna Seca!

The host of the American Grand Prix between 1988 and 1994 and then 2005 to 2013, its short, sharp layout is as fun as it is challenging. It also contains one of the most iconic corners on any circuit on the world: the Corkscrew.

If you haven’t already, now is the time to start practicing your racing lines and throttle control ahead of the Pro Draft which gets underway at the start of March!

Dani Pedrosa: The diminutive Spaniard was a triple world champion before he made his much-anticipated MotoGP™ debut in 2006. He didn’t disappoint, as he notched up two race wins in his first season. 2007 was supposed to be Pedrosa’s year. Armed with Honda’s new RC212V 800cc racer, he struggled to a distant second in the championship. The MotoGP™ crown would allude Pedrosa until he retired at the end of 2018,

Register now at esport.motogp.com and be ready for the first Online Challenge!

The start of the 2021 MotoGP™ eSport Championship is edging closer with the Pro Draft kicking off in March. But before then fans w...