Now in its fifth season, the bigger, better MotoGP™ eSport Championship will kick on in 2021 with a host of new features, starting with an all-new Online Challenge 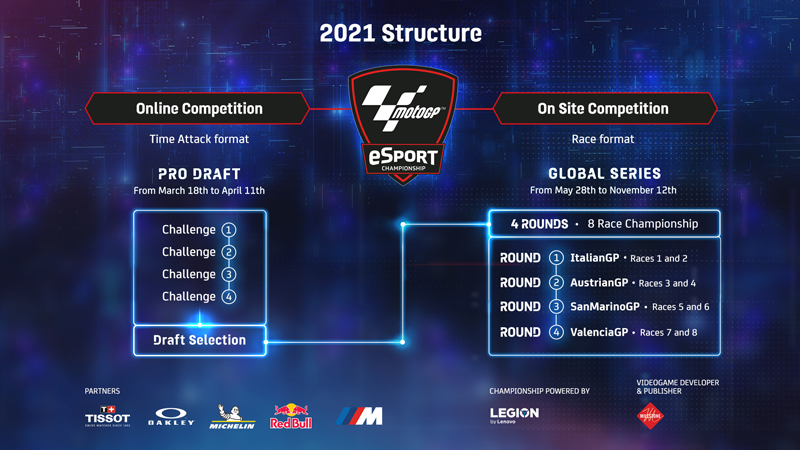 Further expanded and more hotly-contested than ever, the MotoGP™ eSport Championship is back for 2021 with an expanded format and a host of new, exciting challenges designed to test the ability of gamers from around the world.

Kicking on from a highly successful 2020, this year marks the series’ fifth season. Recent figures show the MotoGP™ eSport Championship is not only increasing in size but also continuing to build its audience.  Since 2017 the championship has accumulated 80 million video views, 338 million impressions and 10.5 million engagements. 50% of those numbers are courtesy of fans between 13 and 24 years old. That, combined with 23 Online Challenges, seven on-site events plus four virtual events, make the MotoGP™ eSport Championship one of the biggest racing competitions in the gaming landscape.

The slickly-produced format of its dramatic Global Series showdowns – aired by 16 broadcasters across the globe – also resulted in MotoGP™’s eSport competition being nominated for the prestigious Sports Technology Awards in 2020, in the ‘Use of Esports by a Sports Brand’ category. With continued growth and evolution, as well as current MotoGP™ teams placing greater importance on the performance of its representative in the Global Series, little wonder.

Now, the race is on to create another stunning competition. In 2021 the MotoGP™ eSport Championship will once again be played on the Official MotoGP™ videogame from videogame developer, publisher and longstanding partner Milestone, and the Pro Draft kicks off in March as four Online Challenges decide which names make it into the next phase, the Pro Draft Selection. A total of 22 names can qualify for this phase (with the three winners of last year’s Rising Stars Series also achieving a place, meaning there will be 25 in total), where MotoGP™ teams pick the competitor to represent them in the main event: the Global Series.

There is a twist for this year: the Online Challenges in the Pro Draft will be tweaked for 2021, with the first of those placing new demands on gamers worldwide. For the first Online Challenge, which starts on 18th March, hopefuls will compete with a legendary rider and machine from recent MotoGP™ history. Between the 3rd and the 11th February they will vote for one of 12 legendary names – including Mick Doohan, Wayne Rainey, Kevin Schwantz, Max Biaggi and many more – on social media channels.  The name and machine with the most votes will be the rider and bike with which gamers will compete in this Online Challenge. What’s more, gamers will compete to set the fastest lap time at one of the most famous and historic tracks of the modern MotoGP™ era: the USA’s Laguna Seca.

If the past four seasons are anything to go by, this will be one to watch. No doubt a host of possible challengers have used the winter months to hone their gaming skills as they bid to oust 2020 eSport Champion Williams_Adrian from his throne. Although the Spaniard stormed to five victories from the eight that made up last season’s Global Series, it was clear that a host of names are more than capable of stepping up to take on the king, including previous champions Trastevere73 and AndrewZH.

The Global Series will move the competition from online to on-site in May, with gamers competing for both the Championship crown and some incredible prizes – including a BMW M performance automobile as first prize, provided by MotoGP™ eSport partner BMW M.

This year’s Global Series will consist of eight races held across four rounds from May to November. The current plan is to have on site events, from the Italian  Gran Premio d’Italia Oakley (28th May), the Motorrad Grand Prix von Österreich (13th August) and the Gran Premio Octo di San Marino e della Riviera di Rimini (17th September). As ever, Valencia and the Gran Premio Motul de la Comunitat Valenciana (12th November) will host the season finale, although these events taking place on site are dependent on the current global situation. Check out the full calendar here!

Dorna Sports’ eSport portfolio continues growing. As well as fielding the Online Challenges and Global Series, the Rising Stars Series is now in its second year. Aimed at finding and fostering fresh eSport talent around the world, the Rising Stars Series mirrors Road to MotoGP™ initiatives out on track such as the Red Bull MotoGP™ Rookies Cup, the Idemitsu Asia Talent Cup and more, directed at promoting young talent towards the pinnacle of the eSport.

There is more on the horizon too as the MotoGP™ eSport Indonesian Series begins. Hosted by partner MP1, the series is designed as the perfect platform into the Rising Stars Series, giving the most successful gamer an opportunity to compete in the MotoGP™ eSport Global Series next year.

Stay tuned – more information on the Rising Stars and MotoGP™ eSport Indonesian Series series is coming soon at motogp.com and esport.motogp.com, as well as across social media platforms including YouTube, Twitter, Instagram, Twitch, and Facebook.

An exciting new eSport project is coming soon: the MotoGP™ eSport Indonesian Series. Dorna Sports has signed a multi-year agreement with MP1 to...

Down to the wire – Williams_Adrian takes stunning championship victory

Williams_Adrian can call himself the new MotoGP™ eSport king after two measured rides saw him win a dramatic Global Series finale that was p...