It’s time to vote on which legendary rider and machine you’d like to use during the first Online Challenge. The second group includes four legendary names! 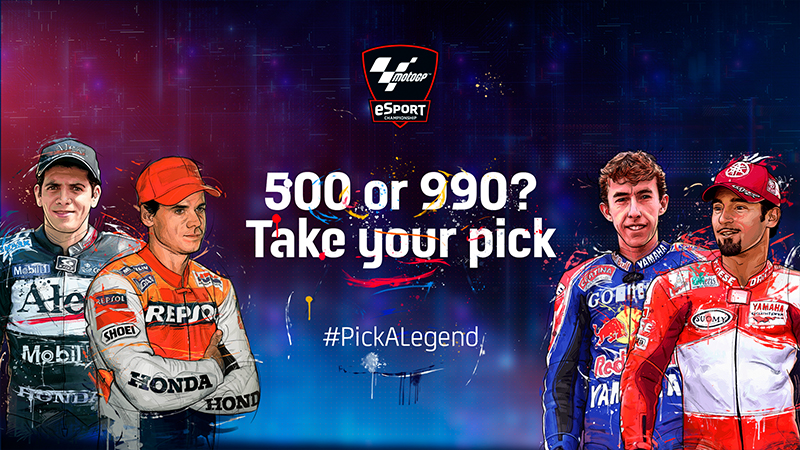 The 2021 MotoGP™ eSport Championship is ready to kick into gear with the Pro Draft penciled in to start in March. But before then fans will have their say on which famous rider and bike from the past will be selected for the year’s first Online Challenge.

The first was on 3rd February, when Mick Doohan and his 1995 Honda NSR500 got the most votes over 24 hours to be entered into a final draw.

The names included in the second group include five of the fastest names from the end of the 20th century/start of the 21st century. The choices include: Max Biaggi and his 2002 Yamaha M1 990cc; Alex Criville’s 1999 Honda NSR500; Alex Barros and the 2002 Honda RCV; Garry McCoy and the 2000 Yamaha YZR500.

Max Biaggi: Best known for his four titles in the 250cc class, Biaggi was also a brilliant MotoGP™ rider on his day. He won his first race in the 500cc class at Suzuka, 1998 and pushed the great Mick Doohan hard in that year’s championship. Three years later he went head-to-head with Valentino Rossi in an epic year-long fight. In 2002 he scored two race wins on the first generation of Yamaha’s M1.

Alex Criville: This softly spoken figure will always be remembered as Spain’s first ever premier class race winner and champion. Criville sharpened his teeth fighting against – and occasionally beating – the illustrious Mick Doohan in the mid-90s. When the Australian was forced out by injury in 1999, the Spaniard was perfectly placed to take over. Six wins that year was enough to carry him to championship glory.

Alex Barros: The Brazilian was one of the most evergreen figures in MotoGP™ history, holding down a place on the grid for an incredible 17 seasons. In that time he scored seven wins. Never was he more competitive than the end of 2002, when he was handed a Honda RC211V for the final four races. In that time he fought – and beat – Valentino Rossi at the Italian’s peak.

Garry McCoy: Few riders in the history of the MotoGP™ have been as exciting to watch. McCoy’s unique style, which saw his slide the rear tyre almost to excess on corner entry and exit, made him an instant fan favourite. McCoy really came into his own in 2000, when he scored three stunning race wins while smoking a load of Michelin rear tyre rubber along the way.